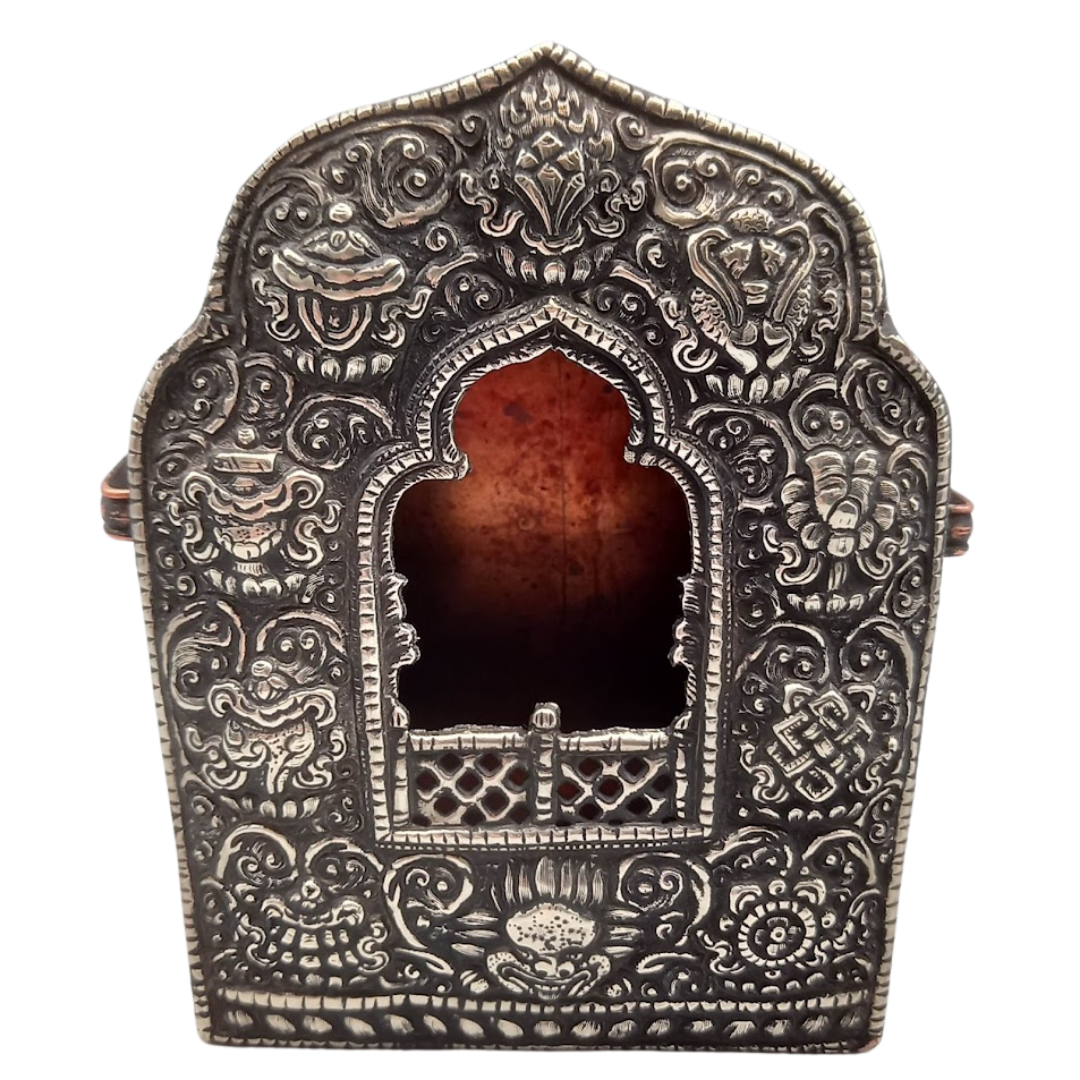 SKU 80645
$108
handmade / copper
In stock
1
Product Details
Buddhist Copper Silver Plated Ghau/ Gao Prayer Box Portable Shrine
Tibetan Ghau, Gao or Gaus were used to carrying sacred relics, magical charms, and medicinal herbs, and acted as portable shrines used for protection when traveling or used in the family altar.
This Ghau box is constructed of copper and silver plated . Ashtamangala design ( which commemorate the gifts offered by celestial beings to Shakyamuni Buddha after his attainment of enlightenment ) around the front window.

A prayer box, Gau (also spelled Ghau or Gao), is a Tibetan Buddhist amulet container made of metal and worn as jewelry. As a small container used to hold and carry powerful amulet objects, the Gau is culturally equivalent to Latin American package amulets, African-American conjure bags or mojo hands, South American charm vials, and American wish boxes. As used in Tibet, Nepal, Bhutan, and Mongolia, the Gau box usually contains a written prayer or a sacred mantra diagram such as the kalachakra. The prayers and mantras are usually hand inscribed or block-printed by a priest and they are always blessed before use. We also have small lockets, perfect for inserting your own prayer or memorabilia inside. The gao is used within this tradition as an amulet - a ritualistic object believed to provide protection from evil. A gao box is often embedded with semi-precious or precious stones or coral. Turquoise and red coral are especially favored in the design of Tibetan prayer boxes. Other gems used often by the Tibetan silversmith are amber, lapis lazuli carnelian, garnets, amethyst, and even rubies, sapphires and emeralds.The gao is usually worn around the neck and hung close to the heart. Within it is placed a scroll upon which is written or printed a prayer or sacred symbol. These scrolls are typically prepared and blessed by a Buddhist priest. In this use, the gao is not unlike a transportable shrine. In lieu of a prayer, the gao might also be used as a container for holding herbs, stones or other objects believed to have protective powers.The Tibetan Buddhist might also place an image of Buddha or other deity inside the prayer box. A gao might even be designed with an opening that allows the person to view the image throughout the day. Alternatively, a cast form of the deity may ornate the surface of the gao.