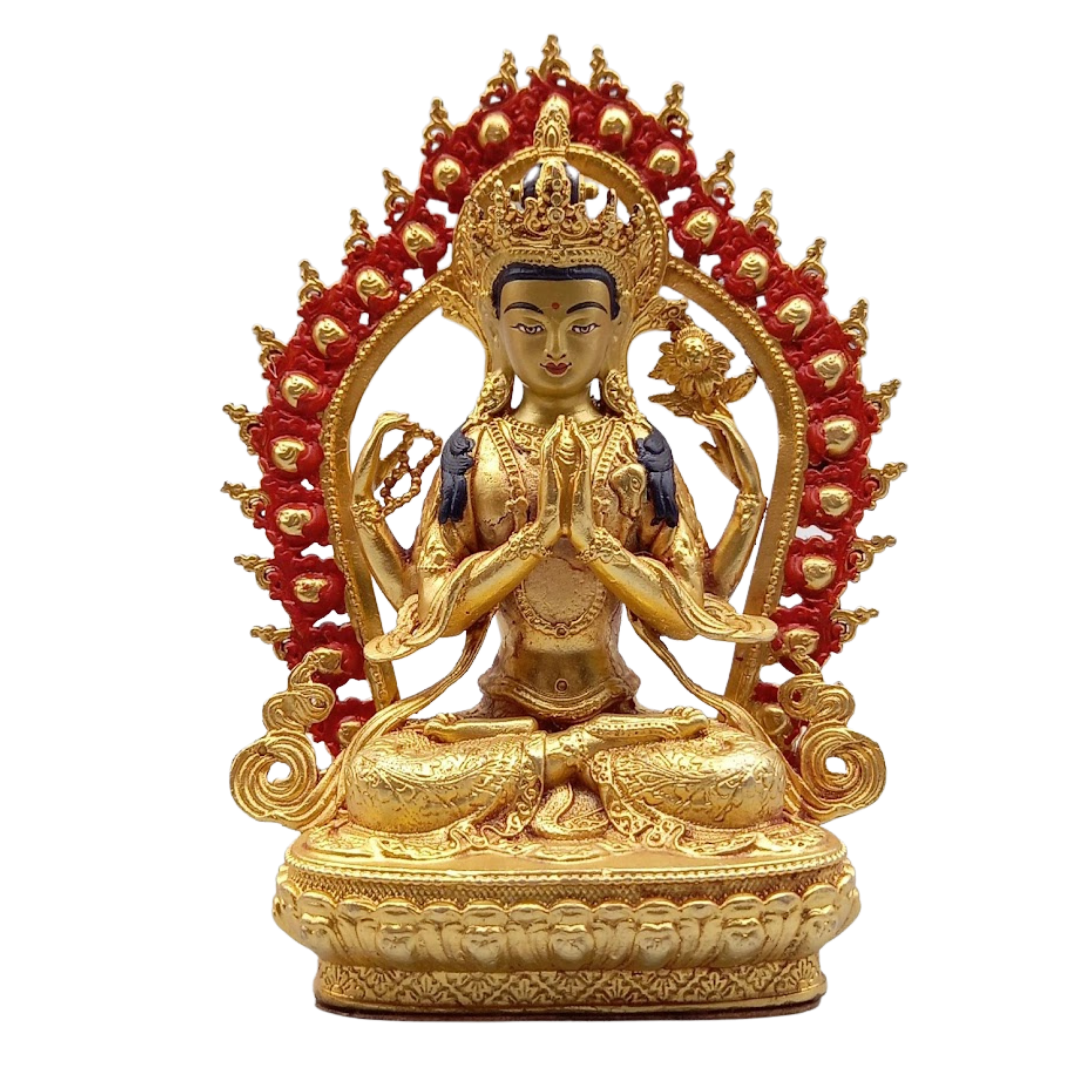 Avalokiteshvara – The Bodhisattva of Compassion

Avalokiteshvara, also called Chenrezig, is the embodiment of the enlightened compassion of all the Buddhas. He is the earthly incarnation of the celestial Buddha Amitabha, and he guards our world during the interval between the historical Buddha, Shakyamuni, and the future Buddha, Maitreya. Avalokiteshvara is universally cherished in all branches of Buddhism, and is considered the patron Bodhisattva of Tibet. Even in non-Buddhist countries, most people are familiar with his mantra Om Mani Padme Hum. Avalokiteshvara courageously vowed that so long as even one being remains caught in samsara, he will continue to work for the benefit of living creatures. His wisdom, compassion and endurance know no bounds, and he is especially revered for granting realizations and spiritual attainments to those who meditate upon him.

Avalokiteshvara is depicted here in his four-armed form, which symbolizes his whirlwind of constant activity in the world. Two of his hands are pressed together at his heart where they hold the wish-fulfilling jewel of enlightenment, the cintamani. This jewel manifests whatever a faithful seeker may pray for, and is also a metaphor for the profound teachings and virtues of the Buddha. Avalokiteshvara clasped hand position further expresses his gratitude and respect for Buddha Amitabha.

In his upper right hand, he holds a crystal mala, or Buddhist rosary, that he unceasingly counts and which represents his continuous compassionate activity in the world. And in his upper left hand, he holds a beautiful lotus flower in full bloom. Just as the lotus arises, dazzling and pure, from dark muddy waters, Avalokiteshvara constantly manifests amidst the misery and suffering of our world, but is never stained or tainted by samsaric conditions. His blossoming lotus is meant to inspire us to do the same, by unfolding the pure compassion of our true natures even amidst the challenges of worldly existence.

On Avalokiteshvara left side, at the level of his heart, is the gentle face of a wild deer; the deer’s skin is draped over his shoulder. The deerskin is an ancient symbol of renunciation, as wandering mendicants often took the skin of a deer as a meditation seat, and sometimes as a garment and blanket. This symbolic meaning applies, as Avalokiteshvara, a Bodhisattva, has renounced the snares of worldly existence, but here it further symbolizes his boundless compassion for sentient beings. According to legend, Avalokiteshvara once took rebirth as a wild deer, but he had such heartfelt compassion for the hunter who chased him that he willingly laid down his life.

Expertly cast from copper alloy and gilded with 24 karat gold with antique finish and hand painted face, this statue is an exceptionally beautiful portrayal of Avalokiteshvara. The master’s figure is gracefully poised as he sits in sublime meditation. He wears a finely carved crown and the elegantly detailed ornaments of a Bodhisattva, signifying his compassionate vow to work for the benefit of sentient beings. His necklaces and arm ornaments, in particular, are beautifully and intricately carved. The rich gold gilding imbues the statue with a gentle warmth, while Avalokiteshvara eloquent hand gestures and handsome features suggest a compassionate spiritual presence.